Showing posts from December, 2019
Show All 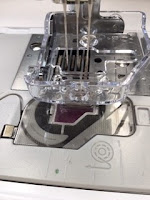 There are many ways you can make your own fabric on the Brother XV/Dream Machine and this is just one of them – using the Needlefelting attachment to embellish and even create your own fabric. Before I get into the detail of how you use this attachment, let me just put two common fears to rest! 1. Will it clog up my lovely machine with dust and lint? Absolutely not! As you can hopefully see in these pictures, all lint and dust produced during needlefelting is caught in the little box attached to the needlefelting plate, sitting snugly in the bobbin race (the bobbin case having been removed). The second picture shows the bobbin area after a couple of projects. Not a scrap of dust or lint to be seen! In fact, I would venture to suggest there is even LESS debris and dust than after a good session or two of machine embroidery. All you need to do is to clean out the bobbin area in the usual way – just as you would if you were doing machine embroidery. 2. Those needles look
6 comments
Read more
More posts