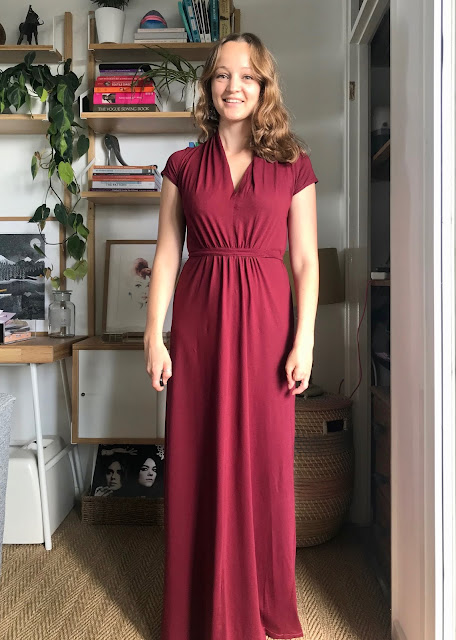 I was incredibly excited about the Mayfair Dress when it was released by Nina Lee over a year ago and I snapped up a paper copy soon after release. For years I had this favourite style of French Connection dress that saw me through many summers; flattering, comfortable and seemingly suited for any occasion. 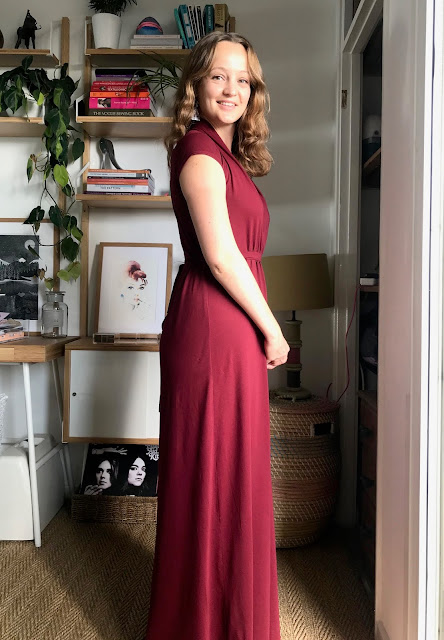 I owned versions in various prints, colours and lengths but may favourite by far was a maxi length version. The previous summer I'd been wearing it with too many holes to repair, hoping that the little purple, black and dusky pink print disguised them. It had been on its last legs for a while and sadly French Connection stopped making them a while before. I couldn't bear to throw it out so I couldn't believe my eyes when I spotted the Mayfair and realised it was almost an exact match – I could make my own replacement!

Why, you may ask, has it taken me so long to make one? I had a really hard time finding fabric that was going to live up to my expectations of this dress. The RTW version has been on such a pedestal in my wardrobe that I wanted to love any version I made just as much. The print, colours and various ways of styling the existing dress really suited me and I think part of me was hoping to find a near-identical print, but of course that was going to be too much to ask.

Any prints I found which I quite liked were on too heavy, too fine, or too stiff of a jersey. Which is why I eventually opted for a solid. At least now I have a version of this dress to wear again and when the right print eventually comes along, I can make another. 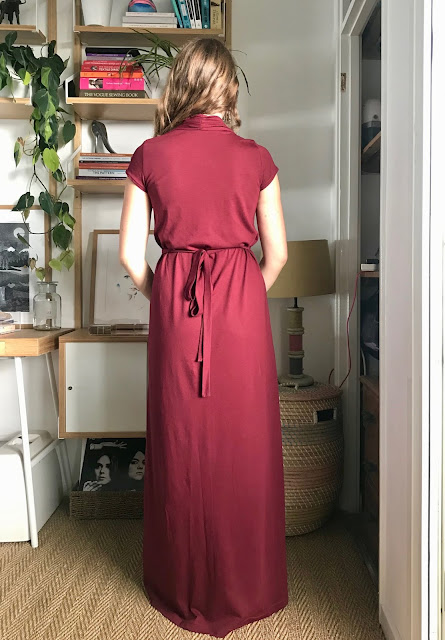 I found this fabric in Valencia of all places when I was there for a girls’ weekend trip a few weeks ago. Pauline Alice recommend to me Julian Lopez in the city centre and what a treasure trove that place was! Four floors of fabric at various price points including traditional Spanish brocades on the top floor – a marvellous shopping experience. No one spoke a word of English and I don’t speak Spanish, so it made for a rather hilarious game of charades getting fabric cut! I also have no idea about the fabric content. At first, I thought it was a viscose jersey because of the lovely drape and movement, but after sewing with it I now think there might be a bit of cotton in there too as it seems a little more stable than other viscose jerseys I have worked with. 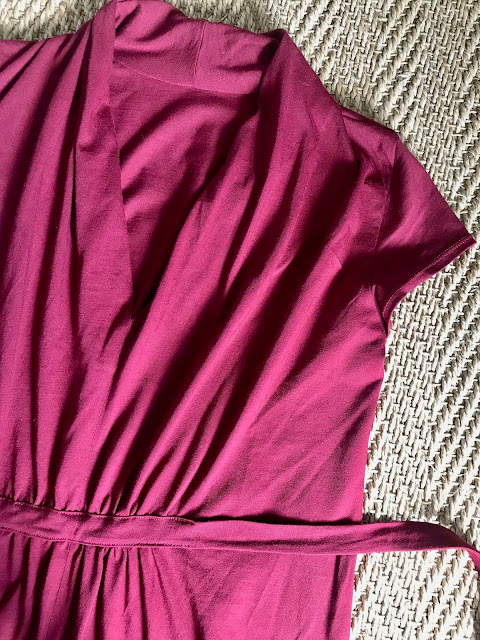 Choosing a soft and drapey knit is very important for this style. The gathering at the waist means you don't want anything too bulky and you want it to drape softly across the bust. I would shy away from a fabric that might potentially be clingy around the hips.

This soft jersey is spot on and I knew as soon as I touched it that it had a similar weight to my original dress. It was lovely to sew with and I had no trouble with the fabric stretching out as I sewed, which can often be a problem with knits of this light weight and drape, particularly when using the twin needle around the hem and cuffs. It did want to curl up at the edges a bit but that was nothing a good press couldn't fix, and it responded really well to a medium-heat iron with some steam. 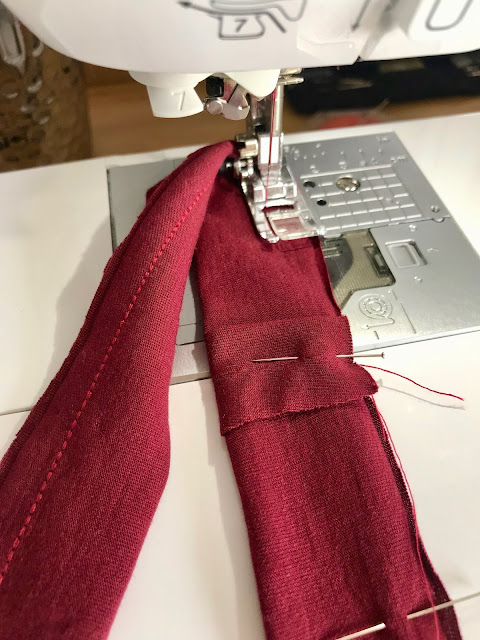 I constructed the majority of this dress using the triple stretch stitch on my Brother Innov-is F420. Usually with knits I'll use a zig zag or one of the many other faux overlock stretch stitches. However, as this dress doesn't have negative ease (meaning the garment doesn't stretch around the body so the seams don't need to stretch too even to take the dress on and off), I opted for the slightly more resilient and slightly less elastic triple stitch. This is a great stitch if you want to press your seams open which this dress requires you to do in a few areas; the other stretch stitches generally catch the seam allowances together. I finished all the seam allowances on my overlocker as usual, just because I personally like a nice, professional-looking finish inside! 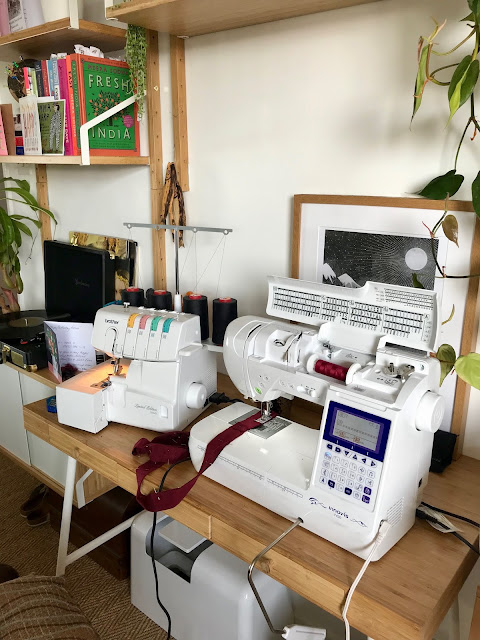 I think my favourite thing about my Brother sewing machine is how accurately it enables you to sew! The adjustable speed and reverse button (which sews just the one stitch if pressed once and multiple if held down) mean you can stop at exactly the point you want with ease. I went into the menu and adjusted the settings to finish with the needle down each time I stopped sewing for this project. This made pivoting around the angled neckline seam a breeze and topstitching the waist tie worry free. 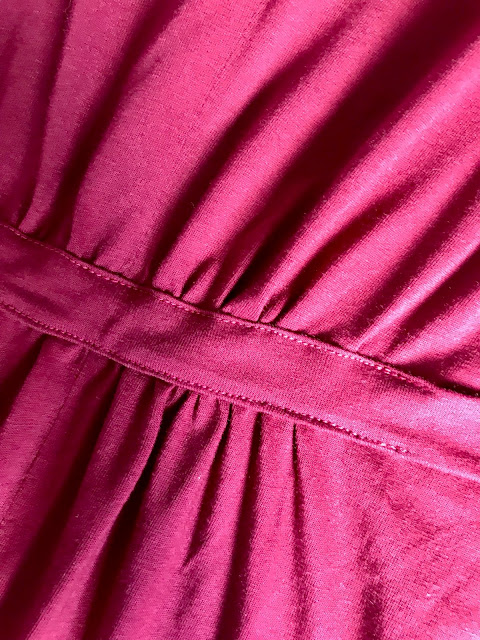 I found the instructions a little confusing in the way explanations of techniques were sometimes worded (but I was quite distracted keeping one eye on the puppy while I read them!). It is a fairly speedy and straightforward sew for a very elegant-looking garment though. The trickiest part is attaching the collar and facing to the back of the neckline and shoulders using the burrito method, and there’s a particularly fiddly section when you are making the maxi version as you have so much fabric in the roll. 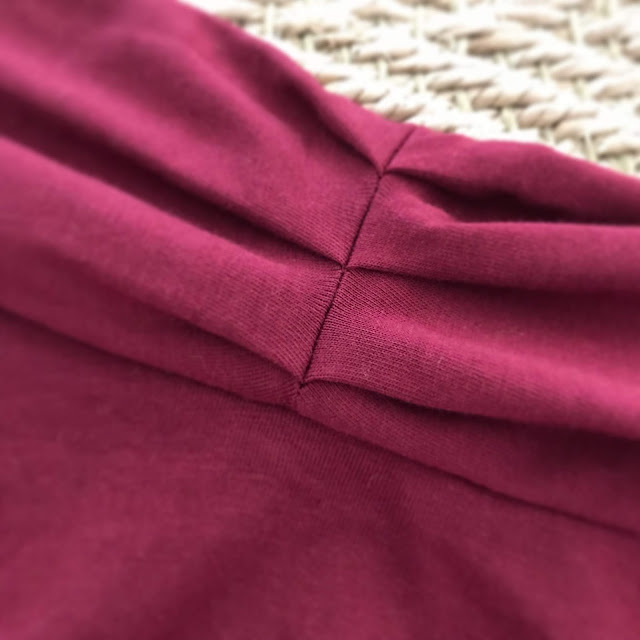 I love the pleated detail at the back of the neck which creates the lovely, soft drape of fabric over the bust. The fabric then gently gathers in at the front of the waist to emphasise the female shape. I also love the right-angled seam where the collar meets the back at the shoulder. Very clever pattern cutting, and I always enjoy sewing something a little different.

Using a piece of clear elastic to gather the front (as well as stabilise those shoulder seams) is a really intersecting and useful technique. I thought attaching the waist tie as well as gathering the front evenly would be tricky, but it was actually very straightforward, thanks to the clear markings and measured piece of elastic.

The elastic is sewn to the right side of the garment so that it is hidden between the shell fabric and the waist tie once that is attached. Despite the elastic being hidden the inside of the garment doesn't look particularly pretty in this area as you see the zig zag stitch for the elastic and then the topstitching for the waist tie either side. Speaking of the waist tie, this was the first project I've sewn in the company of my new puppy and she was very good, apart from the moment when I found her all tangled up in the yet-to-be-attached tie! 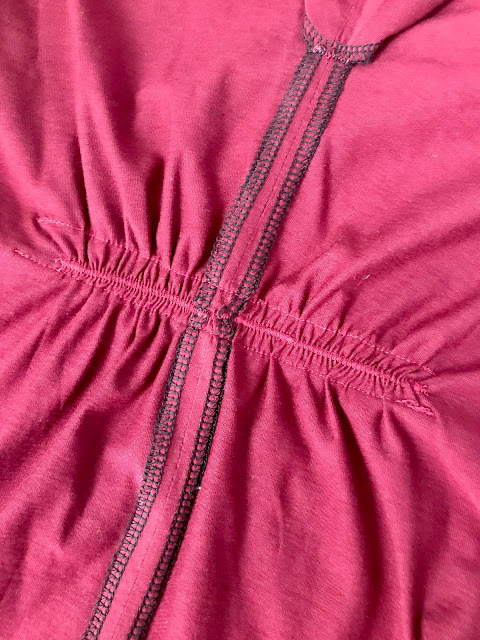 I cut a size smaller than the size chart suggested after measuring my favourite French Connection dress as I love the fit of that. This meant I cut the size 8. I don't think the size 10 would have overwhelmed me so I wouldn't say the sizing is necessarily over generous, I just prefer this slimmer cut and the similarity to my original dress.

The only thing I would tweak next time is the size of the sleeves as they are a little snug around the arm. I don't think going a size up would have solved that problem, so I think I'll just slash and spread the pattern piece to give me a little more room. At 5ft 3" I was surprised to find that the length was spot on straight out of the envelope. I like my maxi dresses skimming the ground but even if you don't if you're taller me I'd recommend adding some length to the pattern before you start. Nina is quite petite too, so probably drafts on the short side! 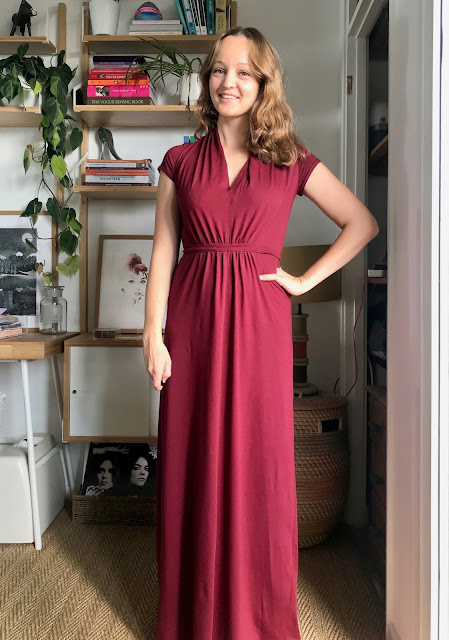 This has only just come off the sewing machine and is yet to have an outing but I'll report back on how it washes and wears on Instagram. I'll definitely be making more of these and am very excited to have this style of dress back in rotation again! The pattern also includes three-quarter length and full-length sleeves which I'm looking forward to trying for winter. 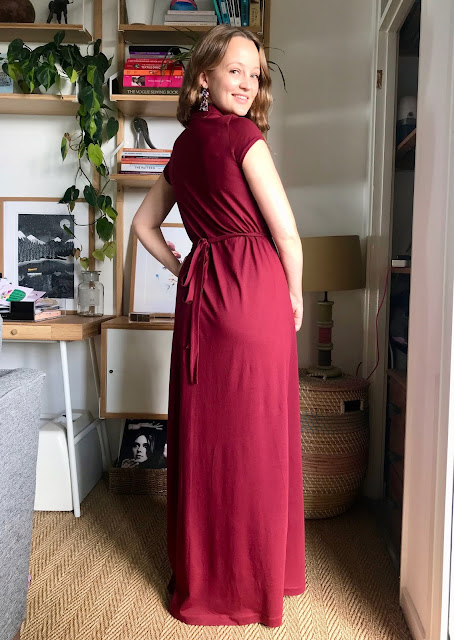